The trail to Rotorua forms part of the Bay of Plenty's network of cycle trails and the New Zealand Cycle Trail network. The trail moves through beautiful native bush from Paengaroa into the lakes area North of Okere, with cyclists able to cycle into Okere and, in the future, to Rotorua, or back to Papamoa. The trail has a gravel surface for about 10 kilometres with stunning views to the offshore islands and Bay of Plenty coast. Along the way are the Paengaroa cafes, the Comvita Visitor Centre, with onward options to Papamoa Beach or Maketu.
Click here  for  More about this trail

Click here for Power point by Cindy about the first 20 minutes of the trail, walking it.
​ 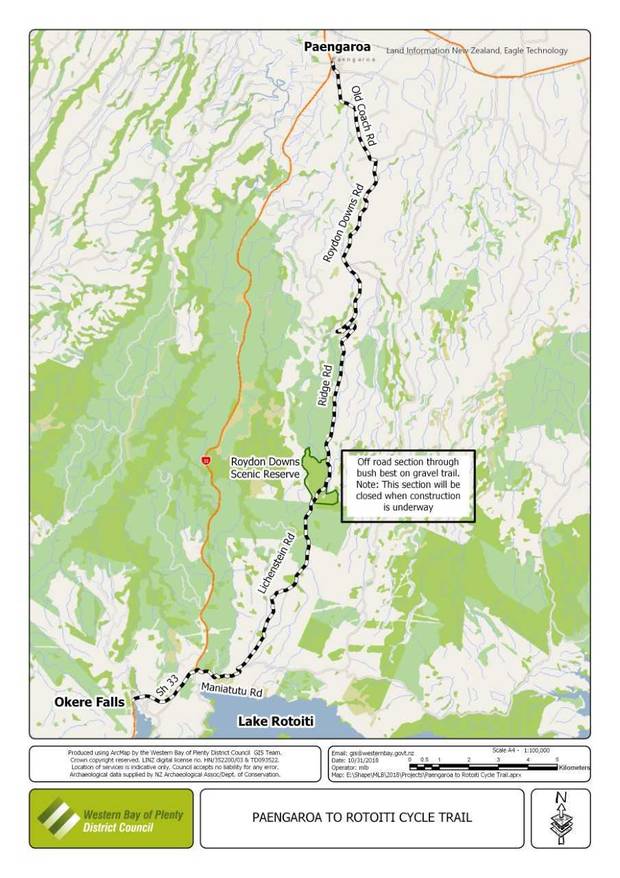 ​Cycleway from Paengaroa to Okere Falls through DOC land - from the end of Ridge Road has been approved. Fundraising commences!!
An abbreviated report on the meeting held on 1st August 2017 is available here.

Download File
The Proposed Cycle rack for area near wagon has been completed by Maketu Rotary on 18th November 2017, looking very smart.
​Picture coming:
We'd like to thank David Campbell of Maketu Rotary for all his hard work and expertise in achieving a fantastic cycle rack and picnic table.
News on the next ​Cycleways –1st Nov 2016 John Fowler reported that he was attending some exciting and future focussed meetings on creating cycleways from Omokoroa to Rotorua, via Paengaroa. The D.O.C. land up Roydon Downs/ Ridge Road is approved for use as a cycleway option through towards Lake Rotoiti. The whole series of projects was to promote “family friendly safe cycling.”
John also reported that Parking and toileting in Paengaroa was a huge issue. It was moved that we approach the Regional Council for Toilets at the start of the cycleway, opposite the trading post, as these have been provided on other cycleways across the country.  Rotorua Trails Trust also involved. WBOPDC – Greg Brown also keen as is Simon Bridges – Minister of Transport. 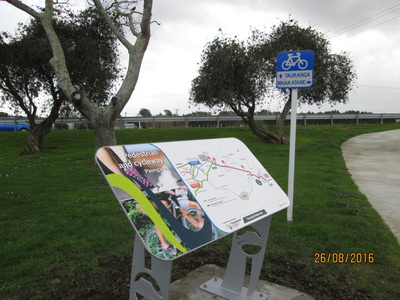 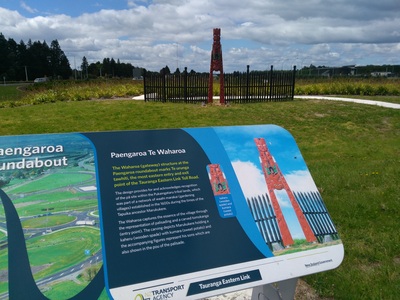 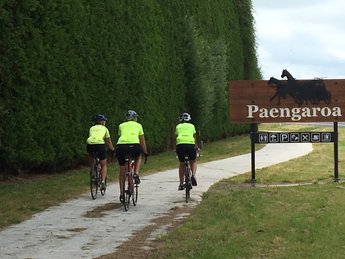 Caroline Boyle - keen biker has something new to offer:   See this advert in the Tourism section of Local Businesses:
Visit Caroline's Website:   www.gocyclingbop.co.nz  detailing four Fabulous rides through the Bay of Plenty . 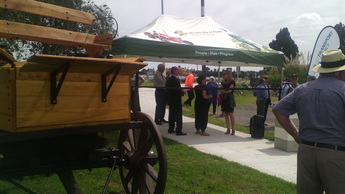 11th March 2016: Our cycleway was opened by Transport Minister Mr Simon Bridges.  The $600,000. 10 km trail links Paengaroa to Papamoa.   Paengaroa School were involved in the opening bringing their bikes and using the cycle way for the first time.  Western Bay Mayor Ross Paterson was there and said this cycleway was the first in a considerable capital works programme throughout the district. Other councillors attended, people from Maketu Community Ward, Comvita and members from our association.  A ribbon was cut, speeches were made, and a lunch was provided to some.  A newspaper article appeared in the BOP Times, Saturday 12th March.
The concrete cycleway, walkway is an amazing resource for Paengaroa and surrounding districts. Linking Paengaroa to Maketu, Kaituna River and Papamoa.
Led by local cyclist John Fowler who worked tirelessly with  Western Bay of Plenty District Council staff we have certainly achieved a fabulous result.
Individuals, the Paengaroa Cycle Group  and Woman on Wheels (WOW) have already put plenty of kilometres on the local road ways.
The Cycleway adds a safer and more relaxing option for everyone. Approximately 10km from Paengaroa Village to the Kaituna Bridge. A relaxing half hour ride, one way.
The careful contouring and wide pathway has ensured that cyclists and walkers can share the pathway with plenty of room for all.
Paengaroa has a number of Café’s just a few pedals from the end of the cycle way. The Funky Lizard across the road, Comvita New Zealand Visitors Centre, the Trading Post Restaurant and Gull service station to refresh and pump up tyres , etc.
The Paengaroa Community Association Inc are delighted with both the speed of development, the commitment to quality and the wonderful potential for Paengaroa and surrounding districts to enjoy a healthier life style.
We urge everyone to grab a bike and a cycle helmet and go for a family fun ride this summer!
The cycle entrances/exists on the T.E.L.  Visit this link http://www.nzta.govt.nz/assets/projects/tel/docs/poster-tel-09-walking-and-cycling.pdf
These posters show the access points to the cycle track.  A similar poster should soon be positioned in the Paengaroa Village at the start of our cycle track, that will show where it goes.
Click  below for a picture of the round-about at Paengaroa showing the Cycle track crossings around it.  Currently the cycle track ends at the Maketu railway crossing.  You then have to bike down Maketu Road a little , turn left into Te Tumu Road then you are not far from the cycle track entrance to follow the new T.E.L. along until you get to Papamoa.  paengaroa_roundabout_dec_2015.docx